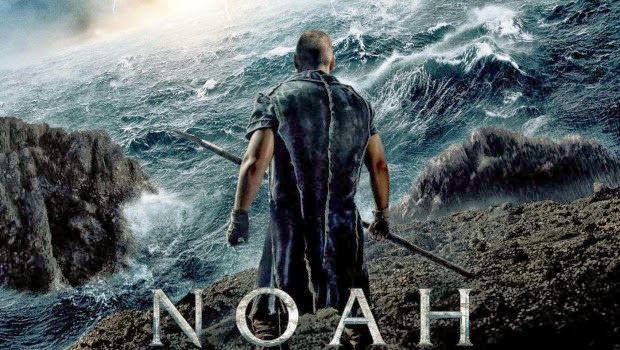 Wow, a movie review? I've never done one before and to be honest I don't think I would have thought of doing one if it wasn't for seeing this film!
So Noah, the classic Bible story that I myself was brought up to know very well by my mother. To all you atheists out there I can assure you now this film doesn't get in depth with biblical teachings as you might suspect, there are elements to it that divert off from this biblical story- so hang in there!

Its set during the aftermath of 'The Fall' or to put simply, the event where Adam and Eve disobeyed God and had eaten the forbidden fruit. From this point on The Creator (God is referred to as this throughout the film) had turned his back against the world and man were left to fend for themselves, and in turn destroyed The Creator's perfect world.

The Creator saw good in Noah (Russell Crowe), a descendant of Seth who fathered three sons- Shem, Ham and Japheth. The film introduces a new character Ila who is not noted to be in the original story from the Bible who is (played by Emma Watson of course) an orphan who Noah adopts into the family after her being found abandoned. Together with them and his wife they built an Arc (boat) and this would hold all the innocent creatures of the world from harm when the The Creator's flood arrived, destroying all those in its path.

Throughout the film I couldn't help but make comparisons to the original story that I grew up with and enjoyed listening to. There were these stone like figures known as 'The Watchers' who were described in the film as fallen angels who, like man on Earth had deceived God and were therefore stuck there awaiting forgiveness. I felt that these really weren't necessary for the film, I'm perhaps saying this because I am biased towards the original story but other than helping to build the Arc in the film they didn't present much of an importance.

A more abrupt difference to the story was that Noah's sons had no wives in the film, which in the story they are to be thought of as already having wives. This in the film presented the issue of Ila being the only woman who unfortunately cannot bear children, leaving Noah's son's unable to reproduce and give new life to the new world after the flood. However, without giving too many spoilers this issue is resolved.

There was a heart wrenching part of the film (which I won't discuss), where I felt a strong dislike to Noah. He's seen as this all loving man about to save The Creator's wonderful creations but the film brings out a side to Noah that isn't perceived in the Bible, and it did surprise me a great deal. I have always thought of Noah being this friendly old man looking after all the animals but I truly stopped believing in this for a tiny part of the film- maybe this was just me?!

I realise I only seem to be pointing out the flaws with this film but please bare with me!

The last comparison I want to make which really is a silly one I confess, it is the noticeable difference of the Arc being more like a cargo container rather than an actual boat. Silly I know! But I always had this image in my head of a ginormous boat full of animals- perhaps seeing cartoons of this as a child didn't help!

Now enough of me perhaps putting off some of you seeing this film, overall I thoroughly enjoyed this film! It really was spectacular and I was on the edge of my seat the whole time, yes there were these minor differences but you know what? This modern spin on a worldwide story really captured my imagination to put it in perspective how big the Arc would have had to been and also what the rest of man must have thought of what was happening to their world. The film really delivered in suspense and surprisingly made me quite emotional at times. It really is worth watching I couldn't recommend it enough, in fact I wouldn't be writing this review at all if I didn't feel that everyone should go and see it!

To those of you who are in two minds of seeing this film or not because you're perhaps a believer in God, please please please do not be put off by the minor differences in this film. It was brilliantly told and Crowe as Noah really was something else- if anything go and see it for Crowe's outstanding acting!

I loved it and I think many of you will also, enjoy!

s/n; As you can tell I'm not a professional of knowing the in's and out's of film reviewing (and book reviews for that matter), I'm definitely not slating the director, producer, screen writer etc- if anything I'm praising them for changing my opinion of this film as in the beginning I honestly thought I would hate it! So thank you to those who made it such a spectacular film :)