The Cuckoo's Calling by Robert Galbraith aka J.K Rowling 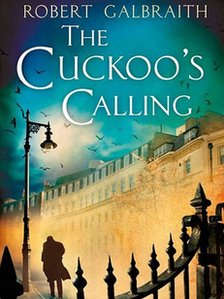 Introducing her first crime novel, J.K Rowling writing under the pseudonym Robert Galbraith. Meet Detective Cormoran Strike! After losing his leg to a land mine in Afghanistan, Strike is barely scraping by as a private investigator. Down to one client and creditors calling, a broken relationship and living in his office. All seems bleak until John Bristow walks through the door seeking for Strike's help to investigate a supermodel's suicide.

Set in London in the grand area of Mayfair to the backstreets of the East End to the chaos of Soho. A brilliant setting for any mystery novel and perhaps another favourable attraction to read this book. I simply have no idea why it's taken me so long to get to read this book, but boy I am thrilled to have done now!

Maybe I was in denial that J.K Rowling had moved on from Harry Potter to a new project, but I can safely say I'm happy she did. I am totally hooked with this new enticing book series she has begun!

When you think of detectives, Sherlock Holmes and Poirot may spring to mind but you will never meet a detective quite like Cormoran Strike!

I'm a big fan of the mystery/detective genre but J.K has put a new spin on it. Cormoran Strike comes across as a sloppy, lonely, unprofessional being and somewhat unattractive. I think that's perhaps what I love about his character? He's not like other detectives, he goes about it differently in a somewhat messy manner.

Nevertheless, the mystery of the legendary supermodel Lula Landry aka Cuckoo is an exciting investigation full of twists and turns and a "who done it" aura. It is so well thought out that kept me guessing right to the very end. You simply cannot put this book aside!

I don't think I could praise this book enough, again perhaps a biased opinion because of my love for Rowling but she truly is a sensational writer.